The first team beat Monkton Swifts 3-2 to win the 2nd division cup. For a full match report follow this link. 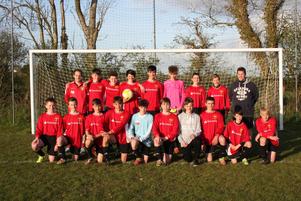 Phil Harries first joined Clarbeston Road AFC as a player at the time of the club’s formation in 1960. He had a loyal association with the club, during which time he undertook virtually every task associated with running a football club. His involvement was part of a real family affair, with wife June, Club Secretary, son Tigger a former player and now grandsons Ben and Harry featuring in junior teams.

In 1997, as incoming Chairman, he successfully led the development of the club to provide new senior and junior pitches and changing rooms by 2002. This facilitated the provision of mini and junior football for all age groups from 7 to 16, together with men’s and ladies teams. In total, local football is now provided to around 160 mini and junior players and to 50 seniors. The club also hosts and coaches the Cleddau Warriors, the disability football club for Pembrokeshire. Under Phil’s leadership, the Club was awarded Welsh Club of the Year, in both 2003 and 2008.

Phil’s farming background was invaluable, in providing ongoing practical assistance and advice with pitch maintenance and improvement. He was also an avid supporter of all the teams, and club social events, attending games both home and away, including junior tours to Europe.

Almost every week, for 26 years, come rain or shine, he acted as linesman for the first team. He was well known and highly respected by clubs and officials throughout the county. Unfortunately, in 2011 Phil was diagnosed with cancer. Despite his illness, he continued as linesman for much of the subsequent period. It was only early in 2015, at the age of 71, that he reluctantly relinquished this role.

Phil was Club President since 2011. He was a very influential part of the Clarbeston Road AFC story. We are very proud of what he achieved and he was a most deserving recipient of the Welsh Community Football lifetime achievement award for 2015.

Clarbeston Road U13s won the Pembrokeshire Cup with a fantastic 3- 2 victory against Tenby in a classic pulsating cup match worthy of any final.

It was a hard fought match with a monumental battle in midfield, but

Clarbeston Road more than held their own against the physical presence of the opposition. Tenby took the lead twice but Clarbeston Road fought back each time with a hat trick from Osian Hill; a penalty in the second half of extra time securing the well deserved win. 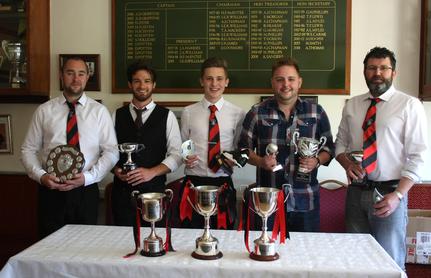 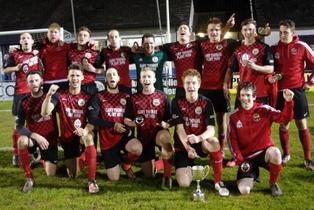 Under 14s Win the League!

Our congratulations go to Clarbeston Road AFC Under 14s who have been crowned Champions of their division following a 5-1 home victory against St Clears in their last league game of the season. Coaches Gareth Owens and Richard Bevan’s boys have now set their sights on the double as they look forward to the Under 14s Cup Final against Tenby. We wish them all the best for the final. 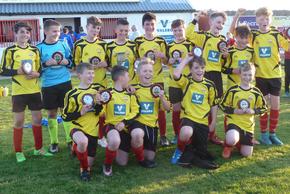 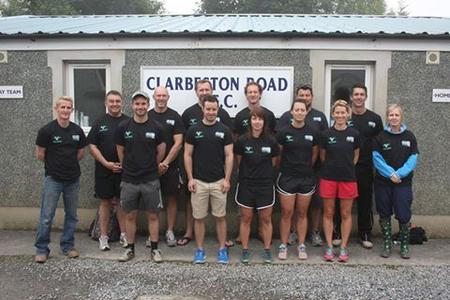 Official Clarbeston Road Club ties are now available at £10 each. Please use the contact us section to obtain more details.

Clarbeston Road AFC has acheived the InSport Ribbon Award in collaboration with Cleddau Warriors AFC. Please see the disability sport section within the Teams tab for the details

A very big thank you from Clarbeston Road AFC to the Pembrokeshire County Council Sports Development Team who spent their volunteering day painting both our changing rooms and helping prepare our pitches and grounds for the new season. You did a great job on the warmest day of the year so far and we are really grateful for your help

For more information please see the facebook page at